Energy Efficiency Programs in the Southwest Have Big Impacts

Updated fact sheets review the history and examine the effects of electric utility energy efficiency programs during 2009-2018 in five states: Arizona, Colorado, Nevada, New Mexico, and Utah. A new overview paper summarizes this information across the region. The overview and fact sheets take a step back from individual utility program plans and annual reports to ask: “What are the overall effects of electric utility energy efficiency programs implemented in the region over the past decade?”
The review shows that households and businesses in the region lowered their electricity use in 2018 by about 18 billion kWh as a result of the utility energy efficiency programs implemented during 2009-2018. This is equivalent to the amount of electricity used annually by about 1.6 million typical households in the region. Consumers in Arizona achieved the most energy savings, followed by consumers in Colorado, Nevada, and Utah (see Figure 1.) 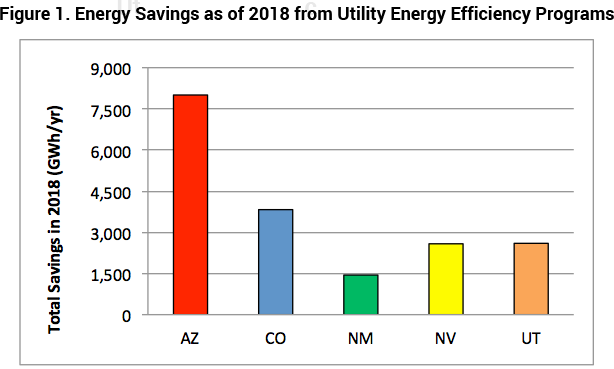 Thanks to the energy savings achieved over the past decade, utilities in the region avoided constructing and operating nine large (300 MW) baseload power plants (or their equivalent). Avoiding the construction of these power plants along with associated transmission and distribution lines saved utilities and their customers billions of dollars, while preventing significant air pollution with its attendant adverse health and climate impacts.
Figure 2 shows the economic benefits of the programs in each state, based on information reported by the utilities. The three large electric utilities in Arizona estimate their customers will save $3.7 billion as a result of energy efficiency programs implemented during 2009-2018. Customers of major electric utilities in Colorado will save about $1.5 billion and customers of the major electric utility in Utah will save $1.2 billion. Customers of utilities in New Mexico and Nevada will save hundreds of millions of dollars. This is great news for households and businesses across the southwest. 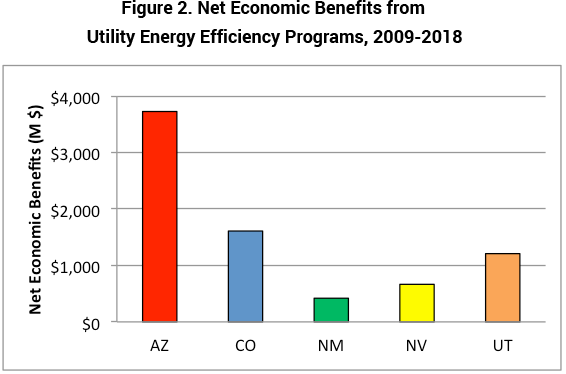 The energy efficiency programs implemented by electric utilities in the southwest also cut pollutant emissions and improve public health by reducing the operation of coal-fired and natural gas-fired power plants. While wind and solar generation are rapidly expanding in the region, coal- and natural gas-fired power plants are still the primary sources of electric power.

Figure 3 shows the estimated reduction in CO2 emissions as of 2018 by state, attributable to utility energy efficiency programs implemented during 2009-2018. Across the region, utilities reduced their CO2 emissions in 2018 by nearly 12 million metric tons, which is equivalent to taking about 2.4 million typical passenger vehicles off the road. 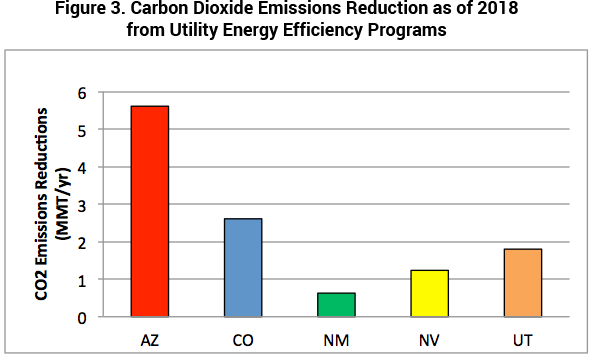 Utility energy efficiency programs are an important energy resource in the southwest, one that is clearly providing enormous economic and environmental benefits to the citizens, businesses, and utilities in the region. These benefits will grow in the future if the programs are maintained and expanded where feasible.
This article was written by Howard Geller, Executive Director of the Southwest Energy Efficiency Project (SWEEP). This article was originally published by SWEEP.  SWEEP is a public-interest organization promoting greater energy efficiency in Arizona, Colorado, Nevada, New Mexico, Utah, and Wyoming. For more information about SWEEP programs and other work, please visit: swenergy.org