Insulation and HVAC don’t get a lot of hype, but making buildings energy-efficient on a large scale could slash carbon emissions.

You may not have noticed unless you live in London, but protesters have been gluing their hands to the asphalt of the city’s thundering eight-lane M25 ring road, to the weirdly technocratic war cry of “Insulate Britain!” Frustrated commuters and the police officers who’ve had to peel these sticky activists from the road find them irritating. Yet they have a point. Among top producers of climate-harming emissions that world leaders plan to address at COP26 in Glasgow in November, buildings are the summit’s largely ignored Cinderella. 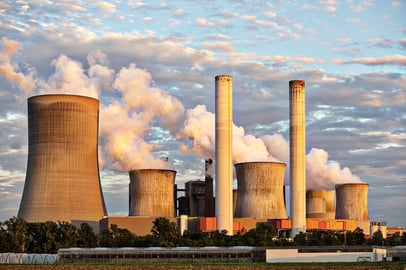 Making homes and offices leak less heat and persuading the construction industry to give up its addiction to demolition and to energy-intensive materials such as concrete, plastics, and steel have so far proved less than appealing to governments in search of solutions to the climate challenge. Retrofitting is costly and disruptive for the voters who happen to live, in the U.K. alone, in the 28 million homes that need an upgrade. It also demands the systemic transformation of a fragmented industry that’s riddled with vested interests, says Stephen Good, chief executive of the Construction Scotland Innovation Centre along Glasgow’s southern underbelly.

Good will be guiding politicians attending the 26th so-called Conference of the Parties around his “innovation factory’’ next month, where he plans to give them a simple message: Don’t get so distracted by shiny new technologies such as hydrogen fuel cells and electric vehicles that you forget the fabric of the buildings where we live and work. Unlike some of these more sparkly prospects, the techniques for making buildings energy-efficient are already here, with improvements emerging on an almost daily basis. Getting construction right isn’t sexy, and when it comes to climate talks, he says, “it’s the elephant in the room.”

The construction and operation of buildings accounts for 35% of the world’s energy use and 38% of all carbon emissions, according to the 2020 edition of the Global Status Report for Buildings and Construction, produced by a group of organizations that includes the International Energy Agency. That’s a big enough number to rate more discussion among the 100-plus leaders expected to turn up in Glasgow. Consider these figures, too: that worldwide housing stock is projected to double by 2050, the year when many countries have committed to make their economies carbon neutral; that according to the U.S. Department of Energy, the average household’s energy use accounts for 70% more carbon dioxide emissions than the average car; and that about a third of a new building’s lifetime carbon emissions have been produced by the day it’s complete, mostly through the manufacturing of materials. That’s damage no amount of renewable heating can make up for.

The most worrying statistic, though, may be that about 90% of buildings that exist today are expected to still be here in 2050. Real-world experience shows that steps such as adding insulation, plugging leaks, and upgrading heating and cooling equipment could reduce these buildings’ energy use significantly, sometimes by more than half. Yet the average annual global rate at which buildings are getting renovated with some effort to cut energy loss is around 1%. In Europe, the rate of so-called deep retrofits that cut energy use by 60% or more—which climate targets will require—is 0.2%. At that speed, getting to them all would take until 2500.

At Good’s innovation factory, one machine makes insulation out of old clothes, polyester, hemp, and other recycled materials. Another makes wood-fiber insulation batts from sawdust. Elsewhere, a group of design and construction companies is cracking the nut of how to ramp up the speed and quality of retrofits by building hyper-insulated wall units—including pre-fitted windows and ventilation ducts—that can be craned onto buildings in a day.

What governments need to do, says Good, is to build coherent strategies for what’s needed and start setting the right policies and incentives to achieve them. Too often, they do the opposite.

Financial incentives in the U.K., COP26’s host nation, encourage developers to demolish and build anew, rather than improve existing homes. They’re also subsidized to install heat pumps, but taxed if they instead insulate to reduce the need for heating in the first place. “It’s just insane,” says Will Hurt, managing editor of the Architects’ Journal, a trade publication that’s been running a campaign called RetroFirst since 2019. The trouble with air- and ground-source heat pumps, the government’s favored climate solution, he says, is that when added to an older building that hasn’t been properly insulated, they don’t save much energy; they have to work overtime because they produce heat at much lower temperatures than gas-fired boilers. The incentives are skewed to do what’s easy, says Hurt, but not necessarily effective.

Take my own retrofit project, a house two hours north of Glasgow that I persuaded my wife and some of our oldest friends to buy with me during a fit of midlife crisis last year. It’s a big, pink, all timber-framed, off-grid summer house, built in 1936 for the doyenne of a cotton-trading family and, in the terminology of the day, a lady companion. Eighty-five years later it remains much as it was—lined with a kind of pressed cardboard for walls on the inside of the stud frame, a tough stucco called roughcast on the outside, and nothing but empty cavities and rattling single-pane sash windows between. As our architect said on first inspecting the structure from a crawlspace under the floorboards: “She’s all fur coat and no knickers.”

The climate-friendly thing to do with this long-neglected wreck is to strip off the dilapidated outer walls and insulate the frame heavily using a lower-carbon, breathable product such as wood fiber. Then add well-sealed windows and a new outer layer of wood-fiber insulation, wrap all that in a membrane, and apply a fresh stucco sheath to repel the driving rain that whips off the Atlantic. The annual heat requirement for our big pink shell is about 220 kilowatts per square meter, according to the Energy Performance Certificate required for buildings sold in the U.K. We hope to be able reduce that number to 27 kilowatts per square meter.

That would cut our energy bills dramatically, especially if we choose a heat-recovery ventilation system, which transfers heat from the air inside the house to warm up the supply of fresh air coming from outside. Yet this approach is expensive at the outset, and not just because you need more and higher-priced materials. Unlike heat pumps, heat-recovery systems attract no government subsidies. A retrofit is also liable to the U.K.’s full 20% value-added tax on materials and labor, whereas demolishing a house to build a new one out of concrete is tax-free. Not only does building a new house trigger another round of embodied carbon—the emissions “locked in” even before a home has occupants—it also means getting rid of the old one. In our case, that would mean carting away 150 metric tons of timber waste alone, by my back-of-the-envelope estimate. That’s all bad for climate policy, but the tax break for new builds was designed to address a different crisis: the U.K.’s housing shortage.

Britain isn’t alone in offering incentives that can be distorting. Nor is it a laggard in trying to address the problem. The election manifesto of the U.K.’s ruling Conservative Party committed to spending £3.8 billion ($5.17 billion) on retrofitting social housing, with pilot projects under way. France and some other European governments are also funding the retrofitting of public housing and buildings. Not only can that lead the private sector by example, it also can alleviate fuel poverty in a population that can’t afford to heat leaky rooms. Across Europe, a patchwork of regions and cities have started mandating the construction and retrofit of buildings, in particular subsidized housing, to standards set by the Germany-based Passivhaus Institut, which spurred a worldwide movement to build houses that need little or no heat.

True, insulating heavily costs more, says Sarah Lewis, research and policy director for the U.K. Passivhaus Trust. But there are knock-on benefits governments are only learning to consider, she says. Those include reducing the health-care costs created by poorly heated homes, as well as the need for more power generation capacity (whether renewable or fossil-fuel), and fuel poverty. As for the climate, “just decarbonizing the energy supply doesn’t solve the problem. You need to cut demand,’’ says Lewis. Italy this year offered a credit called the Superbonus, which allows homeowners to claim 110% of the cost of an energy retrofit against their taxes over a five-year period. Germany offers up to €75,000 ($87,240) in financial support. Adopted on the scale needed to make a dent in carbon emissions, those kinds of programs would make the continent less vulnerable to the type of energy crisis prompted by soaring natural gas prices this year.

Such programs would strain treasuries and supply chains, among other challenges. Insulating a house to such exacting levels requires different building techniques to avoid condensation and rot. The normal principle of building in the U.K., where most homes are made of brick and concrete, is to seal everything with impermeable membranes, add polystyrene insulation, and let air vents and gaps in the structure provide ventilation. By contrast, airtight buildings need walls that, like a Gore-Tex jacket, keep water out while letting some air through. They also need mechanical ventilation. Even highly skilled and experienced builders will have to learn how to do things differently.

“We have to be humble,” says Quentin Galland, a Brussels-based public affairs director for the Knauf Insulation group. “How will we make enough materials and skills capacity? Because if these things aren’t fitted right, it will be for nothing.”

Good, the Glasgow innovation factory chief, has just started a training program to mainstream new construction techniques. He has two model rooms to help contractors learn how to build to Passivhaus levels of insulation and airtightness in different types of frames. But even with several hundred people at a time able to participate, it’s going to take a while to reach the sector’s 3.1 million U.K. workers.

And that, according to Tim Gough, a London architect and spokesman for the activist group Insulate Britain, lies at the heart of what’s been prompting governments to gravitate toward easier solutions. He isn’t optimistic that will change. Beyond the cost (he estimates a deep retrofit of U.K. housing stock would cost around about 1 trillion pounds, or $1.36 trillion), carrying out the work presents a project management challenge on a scale never before seen in peacetime.

“It implies,” he says, “a mobilization of the state that’s something between what we’ve seen with Covid and war.” Small wonder that politicians prefer to wait for some new piece of technological magic to solve the problem.

This article was originally written by Marc Champion and published by Bloomberg.