With energy efficiency and green initiatives an ever-popular – and always costly – topic, finding out that a Brooklyn co-op got its entire building a free energy assessment can make you do a double take.

How’d they do it? The Clinton Hill Cooperative Apartments signed up with the New York City chapter of the nonprofit volunteer organization 2030 Districts, which is committed to reducing building energy use, water consumption, and transportation greenhouse gas emissions 50 percent by 2030. Their goals are a short-term target on the way to Mayor Bill de Blasio’s 80 X 50 commitment, which aims to reduce greenhouse gas emissions 80 percent by 2050. The group intends to educate building owners on energy and sustainability while connecting them with technology and financing to reach green goals. 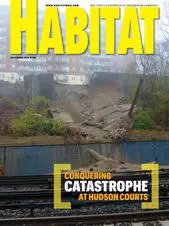 One of the ways they do this is with tools like buildee, a mobile-and cloud-based application from a company called simuwatt, used to gather information during a building’s energy assessment and generate a report (such as the one created for Clinton Hill). The buildee app combines pictures taken onsite, readings taken from the building’s mechanical systems, utility bills, usage, current fuel consumption, and other current efficiency readings from the building being assessed, then compiles them into a report. The app then takes projected costs for a new system (boiler, HVAC, etc.) and new fuel consumption, subtracts incentives, and generates a projected efficiency difference. Those projections can help a building owner decide what, if any, green projects to move forward with.

“When we finish our assessment,” says Frank Maracic, co-chair of the NYC 2030 District, “we can show [a building] where they are today and what they could look like tomorrow, based on the measures that we will recommend to them, what the incentives are, the savings based on the fuel consumption, and so forth.”

To be clear, the assessments done at Clinton Hill were not a substitute for Local Law 87 audits. “We’re evaluating their HVAC system and steam distribution system, [as well as potentially] CHP and solar and some other possible remedies,” says Maracic. “We’ve also assisted them on some past projects, and we’re monitoring them as well.”

Currently, because of limited resources, the organization is confined to downtown Brooklyn and downtown Manhattan. (Their main sponsor at the moment is the Environmental Defense Fund.) “We are focused at these two spots for now,” says Maracic, “but we do intend to go further out as we grow our organization.” But Maracic isn’t leaving the other boroughs out in the cold. If a board in Queens, Staten Island, or the Bronx wants to work with the NYC 2030 District, “we’re not opposed to doing it. If they wanted to join up and sign a pledge and help us work in their areas, by all means we would help.”

This Article was originally published by Habitat Magazine.